Not my specific car, but the Porsche 924 generally.

I have to open by confessing that the first time around [c 1980] the 924 pretty much passed me by. Porsche to me [as many others] was the 911, something sparked in me by the black “911 [930] Turbo” that I’d seen in Condor Man, anything less just left me wanting. Later I took a liking to the front engined models, well, the 928 and then the 944, the latter after a friend’s parents bought one. And by association the 924? Well, it didn’t look as purposeful as the more aggressively styled 944. Then when I was told that the 924 had a van engine, I pretty much dismissed it entirely, a black mark on Porsche’s heritage.

Move on a number of years and very little changed, except, about the time I began lusting after the 968 and gained an appreciation for the smooth profile of the 924, it was actually quite attractive but it wasn’t a real Porsche.

Yet more years passed and generally cars changed, apparently advancing, but my love of the aging / evolving 911 maintained my interest in the Porsche marque.

Possibly 2 or 3 years ago, egged on by a 911 fanatic friend, I was toying with the idea of classic 911 ownership, alas not the RSs shown left, which was something I had been doing for a number of years to a greater or lesser degree of seriousness. To keep my eye in I was eagerly studying the 911 and Porsche magazines. Taking one such magazine on holiday I had pretty much read it cover to cover and was left with one unread article I’d been skipping over, it was a chap’s account of tracking a 924.

That article changed my views. If I recall correctly, it was a 924S the chap was driving. What I am sure of, was that the car had next to nothing by way of modifications. The startling revelation was the author’s love for the car after one day with it. He was surprised at how well it performed. It performed well, this was something of a shock. The lack of power, relative to the other cars on track, was compensated for by the balance and feel [remember steering feedback?] which made for quick progress through the turns. I liked the sound of that. Liked it a lot. I was now loving the simple design of the car so this newly discovered information really captured my interest. 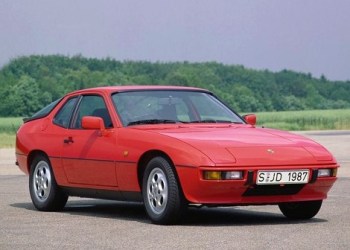 So I did a little 924 research, nothing serious, just dabbling. Firstly, it turned out the 2.0 didn’t have a van engine; it had an Audi 100 engine, which to be fair was also used in a van. It also transpired that the look I’d grown so fond of gave the car a lower CD than the flared 944, and with the 2.5l engine in the 924S many thought the 924 felt quicker at the top end. The 924 was also lighter than the 944 and allegedly all the better for it. Suddenly, from relative obscurity [in my mind] the 924S sounded like it should be on my ‘ones to own’ list. I had been a fool, very much mistaken, this was every bit a real Porsche.

By this point I was taking keener interest in articles about the 924, and the good reviews kept coming. Digging a little deeper I discovered something else that moved the 924S further up my list; parts. In addition to the engine the 924S shares many of the drivetrain components with the 944 and some with the superb 968. Spares shouldn’t be too much of a problem. Better though, some of the uprated parts from the later cars can provide an easy and cost effective upgrade – as much as upgrades are ever cost effective. Taking it even further, with a small adapter the 924S will even take the brakes from a Boxster. The parts situation looked very good and the upgrade options looked great, should the car actually needed for anything.

Ultimately, with modern cars becoming more complicated, driver aided and capable, the idea of a basic well-balanced sweet handling modern classic really got under my skin. I still had a fondness for the superior 944 but somehow the more basic underdog edged it. The Porsche 924S was now firmly cemented at the top of one list of cars to buy. I really wanted one.

So began the perusal of classified ads and online auctions.

A lesson in how not to buy a car »

Leave a Reply to Rob B Cancel reply