It was my moment to enter the big time.

Mechanically speaking. Taking the engine out would be by far my biggest job to date. Why was I undertaking this? Well, following an inspection by JMG Porsche there was a long list of things wrong with the car, mostly oil leaking out all over the place. Well, that was part of it. The engine was running very rich and I was certain that it would not pass the [pending] MoT in December, due to the omissions. Looking at the state of the engine it had all the symptoms of a blown head gasket, which, oddly, could mean two things, the head gasket or damaged oil cooler gaskets.

While it could have been possible to do all of these jobs with the engine in the car, the JMG report suggested leaks at the back of the engine, which would have needed it to come out. Their quote was over £2,500 for parts and labour, which sounds horrendous for a £400 car, but for the work being done, and parts, is actually quite reasonable.

I didn’t want to start spending money on parts unnecessarily so I thought I’d get the engine out and inspect it properly prior to ordering parts. A couple items I did need, an engine hoist and engine stand, both of which I bought from eBay and were delivered in short order. If you buy an engine hoist, be warned for the delivery, they’re extremely heavy indeed! Although not so difficult to move when assembled. 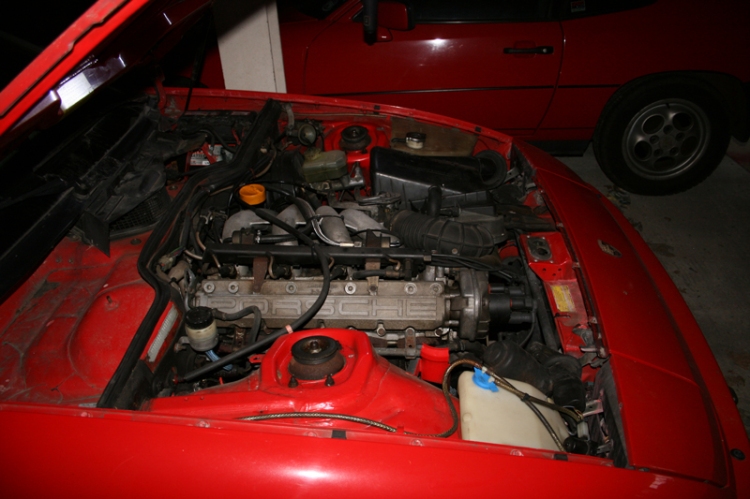 With the MoT expiring mid December my plan had been to get the car off the road when it ran expired and begin the job over the Christmas break. Annoyingly on the 27th December I put my back out and could do nothing on the car for another 3 weeks. It was closer to mid January when I did get started. Not know what I was doing I labelled and photographed pretty much everything, so I knew where to put it back when I was done, this was entirely new ground for me.

So, what does removing the engine involve? I hadn’t a clue, so I downloaded the instructions from Clarks Garage. Now, if I am brutally honest, I didn’t quite understand all of the instructions, as I couldn’t identify by sight some of the parts I was meant to be working on, I mean, who on earth would know what the “vacuum lines to the vent valve and the thermo valve at the back of the engine” are? So, there was some looking online to get pictures while some parts needed a little deduction.

The basic process is (Lots of details missing, but to give you an idea)

In those terms I wonder why it took me so long. The job took me about a day and a half, with a lot of cross referencing and a lot of learning. I gave up trying to remove the DME connector until the engine was out of the way. By the end of day two though I was left with a space in the engine bay, the Porsche 2.5l motor on the floor and a big smile on my face!

Having not removed the clutch cover I couldn’t attach the engine stand, so instead I put two pieces of wood across the bottom of the hoist and lowered the engine onto those. It was a perfect fit. The solution worked so well I didn’t ever use the engine stand, slightly annoying as I could have used the money for parts!

So, engine out, here are a few pictures of this part of the process… 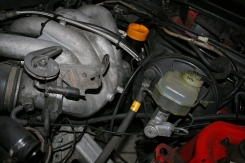 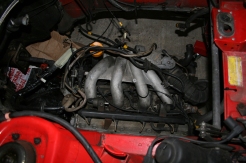 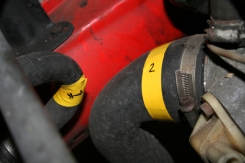 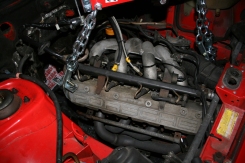 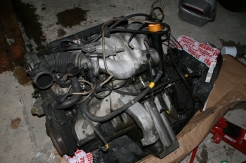