When I got the car the paint was in a slightly worse, bloomed, condition than I was expecting, and there were more dents and dings than I wanted. I wasn’t sure which to attend to first, the paint discolouration or the dings. Chatting with @FailCar who had been through this with his 205 GTi, he pointed out, quite rightly, that I should sort the paint first; there is little point going to the trouble of repairing a panel only to find that the paint is too far gone. Given the starting point there was every chance that would be the case. 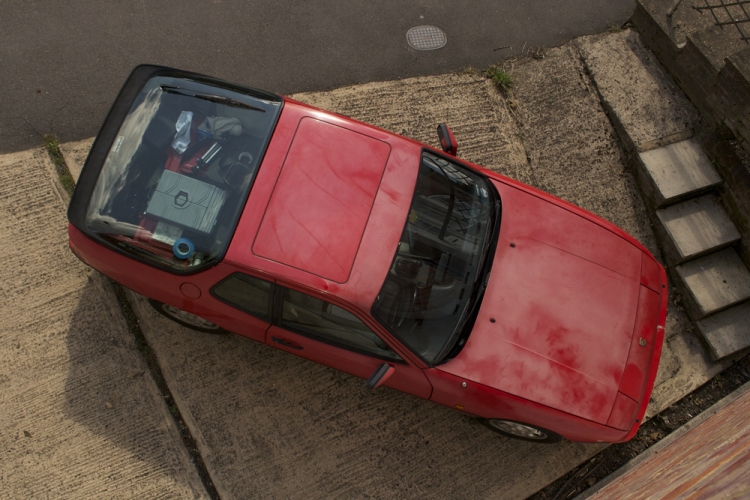 First stage in the process was to give the car a good clean, starting with a little snow foam and then two bucket wash, followed by a rinse and dry. Ironically, the car didn’t look as bad when wet. 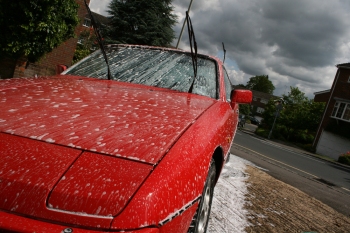 AutoGlym Intensive Tar Remover was used to get rid or any tar spots on the paint as these will spread in later stages if not removed. Next up was a claying; rubbing the paint with a DodoJuice clay bar, using AG Rapid Detailer as a lubricant, to remove impurities from the surface of the paint – the first time you do this you spend ages stroking the pain, feeling how smooth it is. 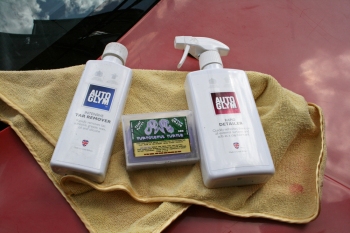 While I was at this I decided that I may as well remove the rear decals, they were going to have to be removed at some stage, to repair a dent in the rear. Besides, at some time someone has made a [poor] attempt to repair a corner of it, they evidently just fillered over the remnants of the decal. Is that you, John Wayne?

Next I went over the worst areas of pain with a 2,500 grit wet & dry paper, suitably wetted with soapy water. I did this, as instructed in an ‘X’ pattern. It was quite nerve racking and painstakingly slow, but the results were apparent almost immediately. When this was done, I rinsed and dried, again. Now to the fun part. Actually, first the really dull part, taping up anything that was rubber and porous, this needs to be done otherwise polish will mark the trim and is an utter pain to get off again.

Now, the fun. I borrowed a friend’s Meguiar’s DA (dual action) polisher. I was using this, for the first time, with a series of Chemical Guys Hex Logic pads, of varying grades, and matching grades of cutting compounds / polish: the grades for pads and Poorboys Super Swirl Remover (SSR) 3, 2 and then 1.

To be completely honest, I didn’t get to use 1 properly. At stage 3, the coarsest compound for the most severe cut, I found that when the blooming was removed it revealed some quite drastic scratches in the paint – I suspect someone had been heavy handed using a sponge to clean the car. This was at its worst on the bonnet and roof, where more pressure had be applied when cleaning. From a distance it didn’t look too bad after the first pass, this is the bonnet after / before split shot…

I had to go back with the wet & dry and use the DA to reveal what I’d done. Eventually I did manage to get the scratches down to something less than awful. I took my time and spent several evenings going straight home from work, rinsing any surface dust from the car and then drying the sections I wanted to work on. I was a lot of effort, but I got the car looking a lot better!

The car still has a lot of room for improvement, I need to tend to those dings and dents next, and the trim. Plus, I decided not to wax the car – I assumed this would prevent new paint from taking properly. Into November now, I fear it is too cold to be carrying on, so I will need to wait until next year before I finish the job. I know this hasn’t been the most logical way of going about the tasks, but mechanical tasks have taken precedent over the last few months.