With the engine out it was time to get my hands dirty.

Taking the engine out of the car, that was something I expected to take a little while. What I hadn’t allowed a lot of time far was removing all of the gubbins, yes, that’s an official Porsche technical term. Anyway, there were a few problems along the way, but I will tackle those separately, so for now, I’ll run through the easy parts. If you see any little yellow or blue labels (letters or numbers) this was method for making sure everything went back in the right place – even though most things will only fit in one place.

For once, I am not going to ramble. Much. As I have mentioned before this is all new to me and the biggest problem I had was knowing what is what, so what we have here is something of a pictorial walk-around of the engine and its various parts, or, if you will, gubbins. The 924 S (944) 2.5l engine.

In rough terms, the rear of the near side of the engine (top left); the oil separator (filler) and clutch cover at the back. The tape is covering the intake manifold inlets.
The off side of the engine (top right); the manifold, above which is the coolant pipe, to the right the oil cooler with the heat shield on and oil filter on the top.
Rear of the engine (mid right); you can see the top of the clutch cover, the speed and reference sensor mount above it, and the cables on the front which run down to the starter. 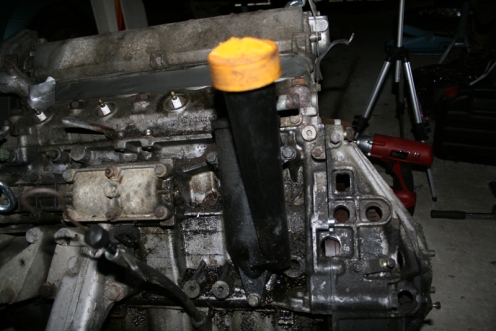 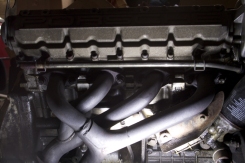 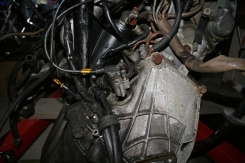 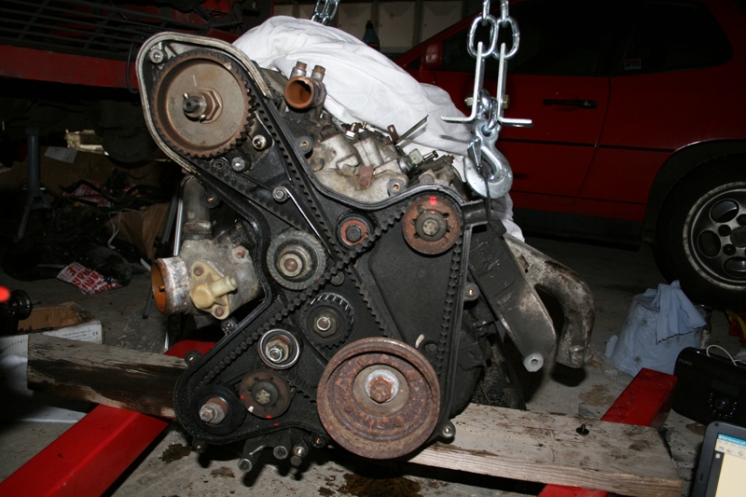 Front of the engine (above); the front of the belt cover has been removed. In front is the balance shaft belt, teeth on both sides, with the timing belt behind. The top gear, where the distributor was, is the camshaft, the bottom right pully (for the alternator belt) is the crank shaft.

Looking at the front of the engine with the belt covers removed completely, shown complete (top right).
The oil pump (top left) is behind the cover in the middle of the picture, which surrounds the crank shaft. It is hard to see, but on this is a feather key – this was one of the parts I had trouble removing.
The lower balance shaft (mid right) is to the left of the crank shaft. 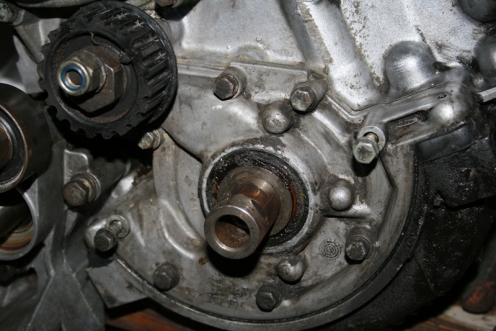 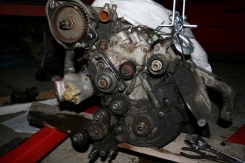 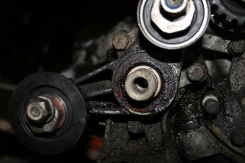 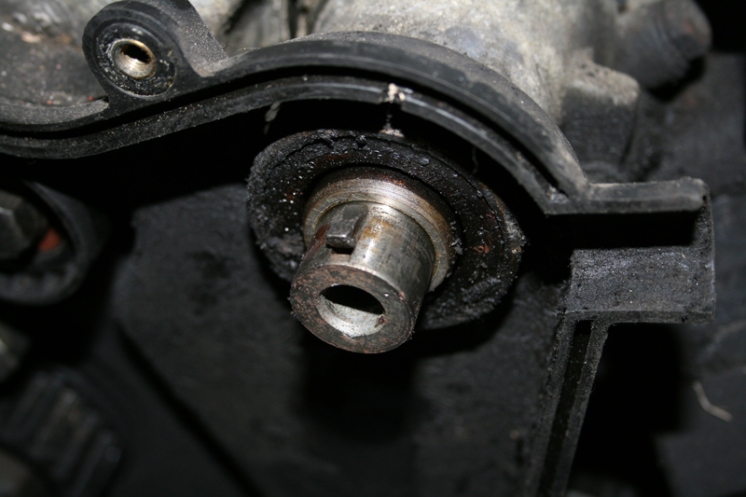 The upper balance shaft (above) is above the crank shaft. In this you can see the woodruff key (rounded at the bottom, where the feather key is flat). Just realised, this one was taken with the rear belt cover still attached.

The speed and reference sensors (top left) are on top of the clutch cover. Just above the top of sensors you can see the small square hole to set top dead centre.
The throttle body (top right) is attached to the intake manifold and the hose runs to the air box.
A rather grubby looking fuel injector (mid right) was actually in far better condition that I first thought. The fuel injectors plug into hole on top of the manifold and are attached to the fuel rail. 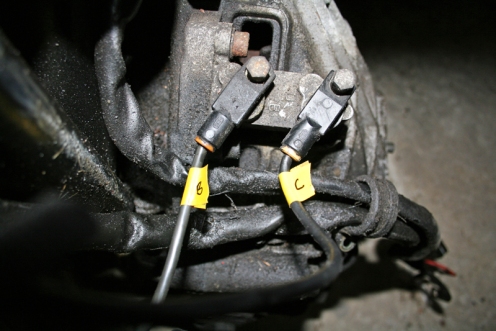 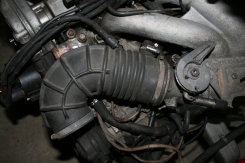 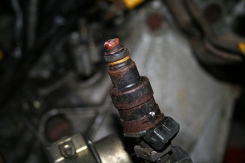 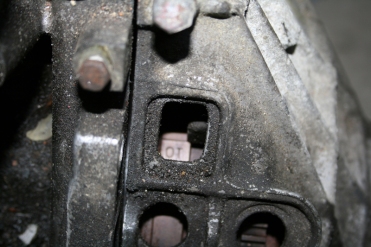 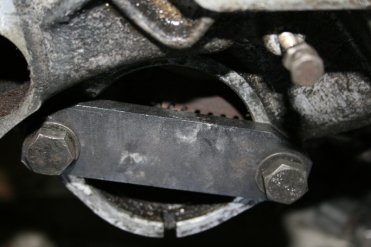 The Top Dead Centre (TDC) viewing hole mentioned above is shown (above left) – top dead centre does need checking in no.1 cylinder as the flywheel turns twice for each cycle of the piston.
The flywheel lock (above right) is the official Porsche item, bought from an OPC. This connects at the bottom of the clutch cover where the starter motor fits.

The bottom of the oil separator removed from the engine (top left), shows how blocked it was. The hole to the right, also blocked, is where it connects. The hole on the far right is just that, a do nothing hole.
The oil cooler (top right) has been removed and was, quite evidently, dropped in the drained oil. The pipe coming off to the right is the water pump.
The top rear of the engine (mid right) shows the inlets on the head and the spark plugs. 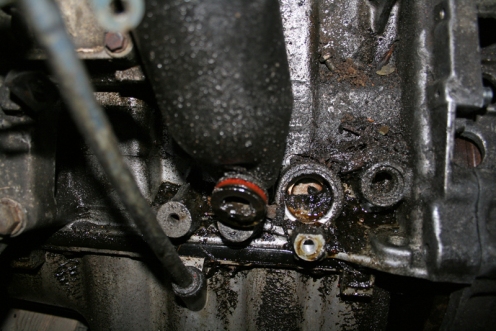 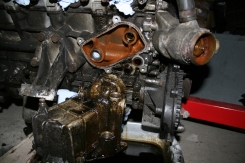 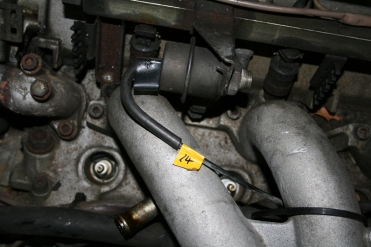 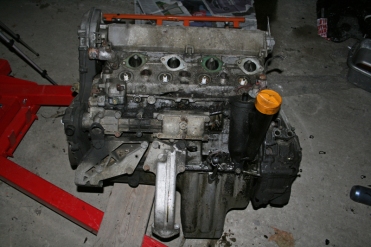 The inlet manifold is shown (above left) at the front of the engine (cylinders 1 and 2) and if you follow the vacuum hose labelled 14, this leads to the connector for the fuel line.
My make shift engine stand (above right) was made using two pieces of wood to support the engine under the oil sump.

The engine was covered overnight, to prevent any dust from entering where I wouldn’t want it. I suspect it wouldn’t have mattered, but in the absence of information to the contrary, I used the engine hoist to lift the engine just enough to take the weight off the sump. That is it for now. Problem items will be the next blog post.